can’t confirm if that is correct or not. Regardless though the show was sick as ruck and I am glad I made the quick trek out there to catch It all. Wish I could have spent more time in Vancouver as it seemed like a less disgusting version of San Francisco with greatly reduced chances of getting mugged or raped from the quick view I got of it. Unfortunately work schedules wouldn’t allow for much else so we had to make it a quick less than 24 hours trip but it was definitely worth it!

My brain was liquifried during night one of Famine Fest on cheap beer and Nasty Ronnie’s joints that he kept puffing into the crowd and passing around. I felt something tingle in my groin when I touched my lips to what had been In Nasty Ronnie’s mouth, like I had awaken after being kissed by a metal knight after vanquishing Amadeus.

Nasty Savage’s set was a monumental return to a lime of pure metal performance. They may not have piledrived anyone In the crowd like days of yore, but they embodied something that only the legends still possess- the ability to look a crowd In the eye and force submission to their will. Most underground bands these days hardly acknowledge an audience. Nasty Savage knew they were there for us and included us in their performance. They opened with the galloping Metal Knights, but Nasty Ronnie hobbled out on stage using a walker. Oh shit, this can’t be, its too late for the real deal, but then crippled Nasty Ronnie, after a few versus, smashes the shit outta that fuckin walker flattening it and throwing it back with our useless pity. The crowd went wild and Nasty Savage spent the next hour and a half jamming out classics like Gladiator, Fear Beyond The Vision, XXX, You Snooze You Lose, Asmofuckindeus and my all time favorite undyfiller The Morgue. Famine Fest was HEAVY I but nothing evacuated my bottom more than the morgue. I banged my head so hard and played my air guitar with more passion I didn’t notice my overfilling diaper. It was moments like that make me want to relive this night, but I also want to relive It cause I lost the setlist I snagged and piece of TV Nasty Ronnie handed me towards tho end.

Oh yeah, Nasty Ronnie also had a big televlsion set that he played cat and mouse with during the first half of the set, pulling it around by the chord and gazing into the screen like Narcissus and taking to it like Oprah, but before he could kill it some crazy drunk barbarian got on stage and heaved It above his head and smashed it down Later Nasty Ronnie picked up the remains and finished the execution. I’II give Nasty Savage the prize of my boobies for being the only band from both nights that was bigger than the ballroom and damn sure bigger than the stage, though Weregoat gets the award for sex.xiest. Hell, I talked with folks from hours away who brought their Nasty cassettes to get signed. Local legends Lord Gore was runner up for me with some kller fatal metal. They played the second night and were obvious crowd favorites with a ragln mosh. If you ever imagine what a death metal singer should look like, Lord Gore’s vocalist would fit it. If the neighborhood cats start disappearing, have the police check this dudes underwear drawer. The music Itself was seriously damn fine death metal ala autopsy or something a bit slower and insanely psychotic. The guitar player Ryan gets my boobies for best guitarist as he played and improvised with his body and facial expressions showing us he was losing his mind. I hope Lord Gore plays another local show soon! Revenge headlined the second night and

musically devastated 010 1 wondorod 11 they could Pull v11 their recordings live and th Off did I was on the hi hat Side~ the ballistic drummer and enjoyed the look on his face every tlmo he lead with the hi hat, a totally possessed hatred took over his eyes and many times he transfixed me with the ultimate stink eye causing my face to uncontrollably contort and eyes widen In agony I’ll never forget that dude’s face. I think the word on local axe men Torture RaCk Is getting out cause their set brought upstairs a ton of v1cbms bnngmg a killer amount of energy. Torture Rack played a formidable set and even added an encore at the end to appease us knuckleheads. I also checked out Trepanation’s set, the first I’d seen in a couple years and they were damn ferocious and faster and tighter and more hair flailed than the last time. 1 hope to see them again. There were a shit ton more bands 1 saw like Funerbrarum (HEEEAAVY) , Ne c r o h olocaus t (FAAAAAAST), Church Of Disgust (TEEEEXAAAAS), Demoncy (What was txithra on?), Necrot (Sick nose) Phrenelith (Undergang): Ritual Necromancy (Good to have you back dudes), and Weregoat (MANGY vermin BONErS). All these motherfucks are worth checking out If you have the chance. As far as Famine Fest 1 enjoyed myself the whole time. The venue was cool for the most part, the only issues 1 noticed were the capacity limit upstairs that caused some delays getting up, and some sound issues for a couple guitarists the second night. But the whole thing ran Incredibly smooth, security was easygoing, and the glory hole in the girls bathroom lived up to the Yelp revieew. 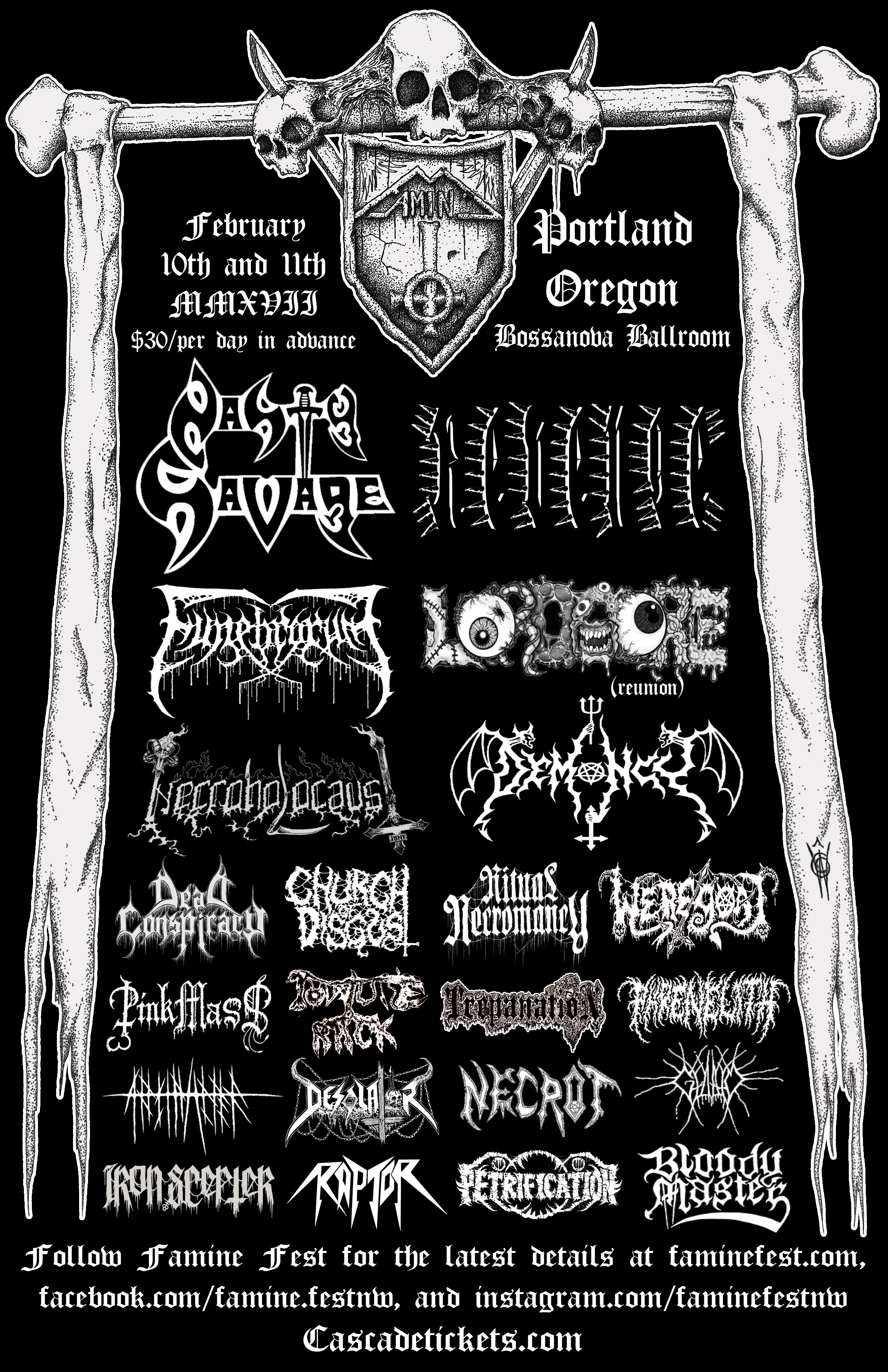