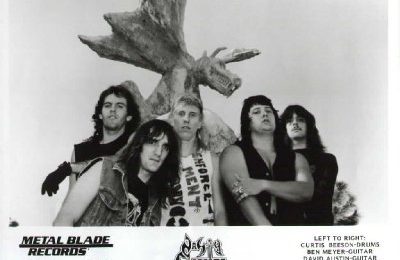 Interview with Florida’s veteran thrash masters – Nasty Savage, about the newly-reformed group and their latest CD.

First of all, would you politely tell us the latest news from the Nasty Savage camp? What’s up with you guys as far as your reunion thing with the original line-up, and new Nasty Savage’s full-length studio album?

Yes, we are recording a new CD with ten or so new songs – it’s NASTY SAVAGE 2003!!! EXCLUSIVE NEWS: The big news about it is we have a producer that will produce this new Nasty Savage CD, and he is a legendary guy: Paul Curcio, who produced the first Metallica Album and has also worked with Slayer and Anthrax, as well as the Doobie Brothers and Santana to name a few. I myself saw the platinum Kill Em All record framed – actually there were 2 of them: one for cassette tapes and one for vinyl LP. Wow! We hope he can bring out something new in NASTY SAVAGE.

How did the idea to get the original line-up back together start? Was it kind of a hard task to contact to the rest of the original Nasty Savage members after all these years again, and to convince them that there’s still lots of demand for a killer old-school Thrash Metal band like Nasty Savage, what most of us old-school metalheads have always known you for?

Well in 1999, it was the Bang Your Head gig in Germany that got Nasty Savage together again. Curtis didn’t go so Jim Coker played drums, and Richard didn’t go but Fred Dregichan (Nasty Savage’s original Bass player) made the trip. It was a unbelievable trip that I will always cherish – to go back to something I thought was totally gone from my life. Most of us stayed in contact over the years .We had a offer from Crooked Records to re-release Penetration Point CD. After that, we had a offer to record something with Crooked, so I said, “how about two new songs and the demo on a cd?” They said yes, and I called Curtis to tell him I really wanted him to be back with Nasty Savage and let’s all do it like never before. Richard Baitman was back too, and he kicks major ass on bass, and wrote two new songs for the new CD. So if the demand is there for old school thrash metal , then we will have the supply they will need!